Tendon injuries are time-consuming and frustrating and an all too common occurrence in the athletic horse. With huge forces being placed on these long, strap-like elastic structures that attach the muscles to the bones in the limbs, it is no wonder that they are susceptible to damage during exercise. Once damage has occurred to tendons, healing can take anything from 3 to 12 months and in some cases the horse may never return to its previous level of activity. Early diagnosis and treatment is imperative to achieve as favourable an outcome as possible.

As mentioned, the role of the tendon is to attach muscle to bone to assist movement of the skeleton. In the limb, they are classified into two groups, the extensors at the front of the limb, and the flexors at the back of the limb. The flexor tendons play a huge role in absorbing the forces applied to the leg in motion and when weight-bearing, so are the most susceptible to damage during exercise. The two flexor tendons are the superficial digital flexor and the deep digital flexor that course the back surface of the cannon bone and insert on the pastern bones and the coffin bone, respectively. 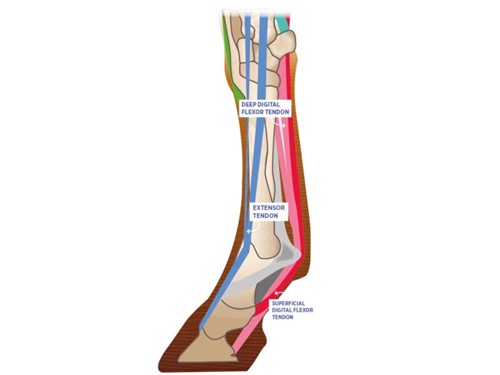 As the tendons pass over bony prominences, such as joints, they are often enclosed in a synovial filled sheath to enable smooth and frictionless movement. The tendons themselves are composed of bundles of longitudinal elastic fibres. These fibres can become injured and torn if excessive force is placed on the limb, or during strenuous exercise. Disruption to these fibres cause inflammation in the post-injury phase and over time as the tendon heals, the injured elastic tendon fibres are filled with fibrous scar tissue resulting in a tendon with reduced elasticity and loss of normal function.

The first sign of a tendon injury is often an increase in skin temperature of the affected area, which is frequently accompanied by swelling and pain. These are all signs of the acute inflammatory process. As the tendon heals and scar tissue is produced, the tendon will appear thickened/bowed. The severity of the injury can vary from mild strains, with little or no lameness, to full thickness tears/rupture where the horse will be severely lame. Ultrasound is used to confirm the diagnosis, with lesions seen as dark areas within the tendon representing damage to the normal fibre pattern.

So how can we treat tendon injuries?

A multimodal approach is often used to improve the outcome in tendon injuries. In the immediate post-injury phase, the aim is to reduce inflammation by resting (box rest reduces the strain placed on the healing tendon), icing or cold hosing the area and bandaging to immobilise the limb and reduce swelling. Anti-inflammatories such as Bute (phenylbutazone) may also be given to reduce swelling and provide pain relief.

In the long term, the aim is to encourage improved fibre alignment and regulate scar tissue formation for the tendon to restore as much elasticity and tensile strength as possible. Tendon regeneration is a slow process and so this has led to a continuous quest for new treatments.

One new such treatment option is class IV laser therapy. This involves directing a high intensity near infra-red beam of light into injured tissues. The infra-red light interacts with receptors deep within the tissue having several effects: 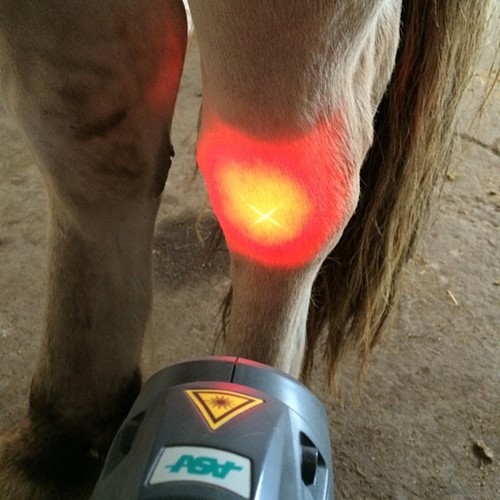 This is supported by a paper in 2018 by Pluim and his colleagues in Germany. They examined the effect of lasers on soft-tissue injuries in 150 horses at Tierklinik Lüsche Equine centre. The Warmblood sport horses were treated at the clinic for acute or chronic superficial digital flexor tendonitis or suspensory desmitis, receiving high-power laser therapy daily for two weeks. The team performed follow-up clinical and ultrasound exams four weeks later. The following observations were made:

Overall, with few side effects, and treatment tolerated well, laser therapy is a promising new treatment option, reducing inflammation and swelling in the short term and improving return to full function with stronger healing in the long term. 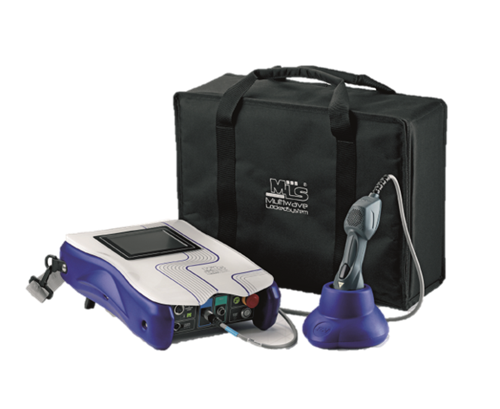 If you need to chat to one of our excellent team members, don't be afraid to get in touch!

If you need to chat to one of our excellent team members, don't be afraid to get in touch!